Results of the Digital Euro Experiments by the ECB

The European Central Bank (ECB) recently announced that it will start an investigative phase of the digital euro project in Q4 2021. While this was not a big surprise to many who closely follow the worldwide discussions about CBDCs and digital money, the ECB released a very interesting report on experiments that were conducted over the past 9 months. This report and its results caught many by surprise. It shows that the ECB has already tested different technologies as the core infrastructure for a potential digital euro and investigates how to mimic cash-like privacy and offline payments in a digital world. This article provides a brief overview about the background of why the ECB looks into the digitization of physical cash, which experiments it has already conducted, and which results these experiments produced.

For years, cash has been losing importance as a means of payment worldwide. Scandinavia is at the forefront of this development, with surveys by the Swedish Riksbank showing that in Sweden less than ten percent of transactions are carried out in cash. As a result of the Corona pandemic, the trend toward digital payment methods has also increased further in the rest of Europe. For example, according to representative surveys by the German Bundesbank, the proportion of cash transaction value in 2014 and 2017 was 53 and 48 percent, respectively, but by 2020 it had fallen to only around 32 percent. This trend is expected to continue in the future, resulting in a further decline in the share of cash in payment transactions.

Cash plays a special role in today's monetary system. It is the only legal tender. Money created by commercial banks represents a claim on the respective bank, where the bank customer holds his current account for the disbursement of cash. Because central banks, in contrast to commercial banks, cannot become insolvent and can even operate with negative equity, central bank money is a very safe form of money. Central banks around the world are increasingly emphasizing the need to ensure access to a public and secure means of payment also in an increasingly digitized world.

The decline of cash as a relevant means of payment is, therefore, one of the main reasons for central banks in advanced economies to consider developing their own digital currencies, so-called central bank digital currencies (CBDCs). To some degree, CBDCs have the potential to become “digital cash” and mimic a digital version of “physical cash”. The ECB announced on July 14 that it will launch a two-year investigation project in which the Eurosystem, consisting of the ECB and the national central banks in the euro area, will examine the framework conditions for a potential launch, different design variants, and the possibilities of issuing a digital euro. Following the investigation phase, a decision will be made on the start of a further development phase lasting up to three years.

Experiments of the last nine month

In the investigative phase starting in Q4 2021, the ECB will build on the findings of previous experiments conducted over the past nine months. In the experiments, the ECB tested various technical design variants of possible technical infrastructures for different functions in four workstreams:

Results of the experiments

The four technological designs were examined for different functions: 1) the scalability and flexibility of the technical designs, 2) privacy while complying with AML and CFT regulation, 3) the possible quantity limits of the digital euro, and 4) end-user access. 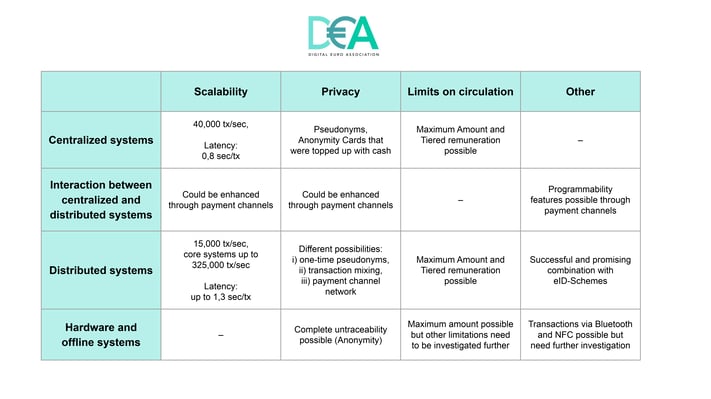 The Digital Euro Association (DEA) is a think tank specializing in central bank digital currencies (CBDCs), stablecoins, crypto assets, and other forms of digital money. In particular, we focus on the digital euro. Our mission is to contribute to the public and political discourse through research, education, and by providing a platform and community for policy-makers, technologists, and economists to discuss digital money-related topics. We are committed to independence and excellence, aiming to set the agenda and to shape policy by encouraging new ideas and forward-thinking in the field of digital money. We target new and innovative topics such as the digital euro and Stablecoins, but also “classical” crypto assets such as Bitcoin and Ether.