The objective of this paper is to summarize Russia’s CBDC efforts and identify aspects that could be relevant for the digital euro project. Perhaps more than any other CBDC pilot, there is significant interest regarding if and how a CBDC could help Russia’s stated goals to decouple or reduce its exposure to the international financial order, even helping it evade or reduce the pressure of sanctions.

Without taking a position on the current invasion of the Ukraine or the economic and trade sanctions imposed on Russia, this paper will try to make an objective description of that country's efforts to use CBDCs that may still be relevant in the less extreme circumstances of the digital euro.


Decoupling
The Bank of Russia has been reducing the share of USD in its reserves since at least the invasion of the Crimean peninsula. There have also been several efforts to reduce the dependence on western debit and credit card networks and other retail and wholesale payment systems.

Ribakova, E. (2022a) of the Institute of International Finance (IIF) recently presented the following comparison of the composition of the central bank’s reserves between 2014 and 2021. We can see a sharp fall in the US dollar, a minor fall for the euro and proportional increases for gold and the Chinese yuan (Figure 1). 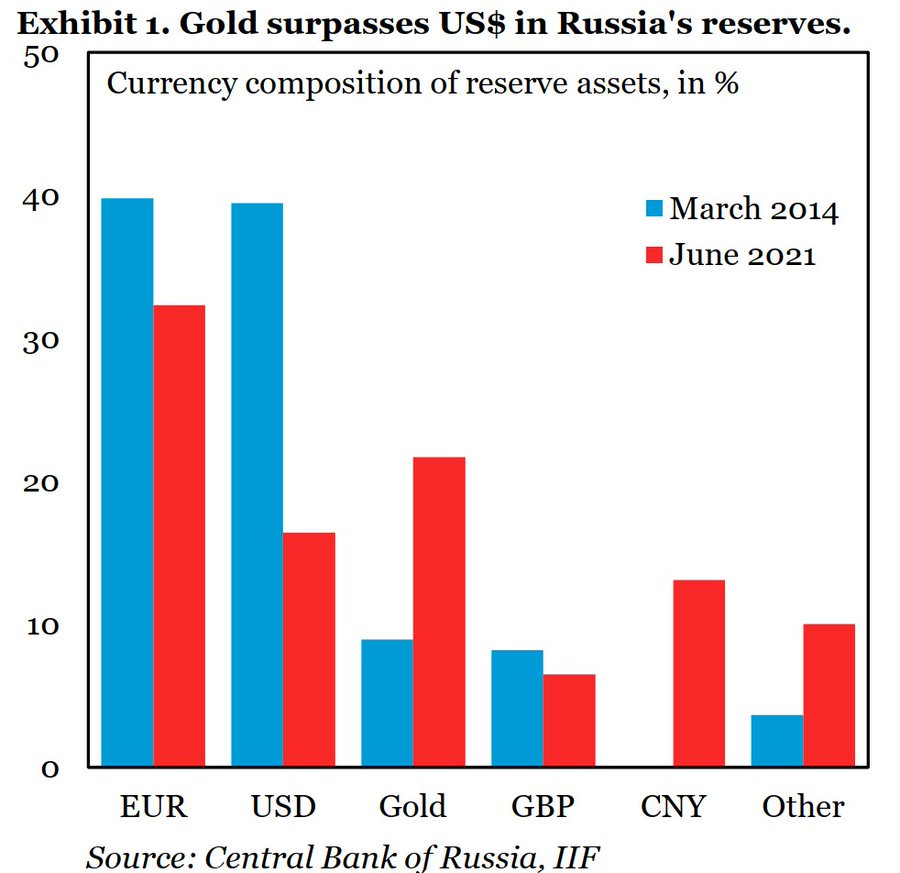 Figure 1
Currency composition of the Bank of Russia’s reserves (source: Ribakova, E. (2022a))

Ribakova, E. (2022b) also shared that Russia, like other northern european countries, has seen a sharp fall in cash use (Figure 2): 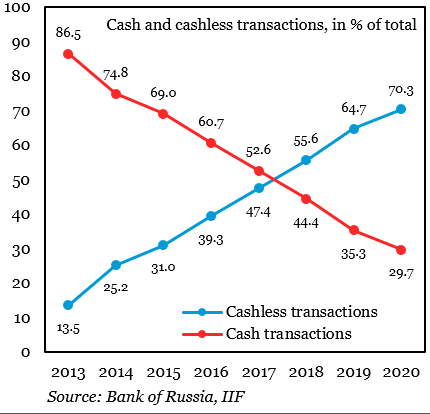 In response to the sanctions and financial pressure related to its annexation of Crimea, Russia has been diversifying its use of foreign-owned or controlled wholesale, cross-border and retail payment systems. For example, Russia has developed a debit and credit card system called MIR to reduce its reliance on Visa and MasterCard, which stopped offering their services to some banks in 2014 (see BBC (2014)). It has also pushed ahead with a SWIFT alternative called System for the Transfer of Financial Messages (SPFS).

Ribakova, E. (2022c) also shows that homegrown payment systems have made some progress but Russia was still some way off from financial payment system independence in 2020 (Figure 3).

Digital ruble
The central bank of Russia announced its interest in a CBDC (see Bank of Russia (2020)) as far back as 2020. It opened a broad consultation that envisioned a digital ruble that could be used to pay for goods and services, make payments to organizations and the state, and to pay for transactions with financial instruments, including digital financial assets. The Bank of Russia even envisioned potential CBDC offline use  for occasions where payment card use wouldn’t be possible for CBDC users. In late 2020, a Russian regulator announced that Crimea may be one of the first places to use the digital ruble (see RT (2020)).

In January 2022, CoinDesk reported that the Bank of Russia had stiffened controls on the use of cryptocurrencies and stablecoins as a means of payment (see CoinDesk (2022)). The central bank argued emerging markets put their monetary sovereignty at greater risk than developed markets, which could take a more gradual approach.

In February 2022 Central Bank Payments News shared a timeline for the digital ruble project. In the plan it is outlined that in the first stage, the Bank of Russia would issue the CBDC, support wallets, and test transfers among individuals (see CBPN (2022)). In the second stage, CBDC use cases would include being used to pay for goods and services, sell smart contracts, and interact with the Treasury. In the final stage, offline payments will be tested, interactions with financial intermediaries and digital platforms be investigated, and exploration of non-resident transactions would be made.

The Bank of Russia summarized its CBDC efforts early this year (see Bank of Russia (2022)). In the summary, the Russian Central Bank detailed the proposed two-tier structure:

Since the invasion of Ukraine, it is likely the central bank has reduced the priority of its pilot. Even if the Bank of Russia and the Russian government have been reducing their vulnerability to sanctions since 2014, they were probably surprised by the extension, speed and coordination of the most recent rounds of sanctions, such as the freezing of international reserves and the exclusion of some Russian banks from SWIFT.

There have been reports of Russia, China, and other countries looking to increase the use of their own currencies in trade and reduce the use of wholesale, cross-border and retail payment networks owned or controlled by countries imposing sanctions. For example, there has been a greater participation of Russian institutions in China's CIPS (international payments) and UnionPay (credit and debit cards), and talks between Russia and India towards changing oil payments to rubles or rupees.

As reported in the Financial Times, Union Pay is a major player in bank cards. It has 9 billion in circulation, 2 billion more than Mastercard and Visa combined. Of that number, only 150 million are outside China, but we may see more if Russia, India and Brazil seek alternative systems (see FT (2022)).

According to Litova, E. (2022), Elvira Nabiullina, Bank of Russia Chairwoman, stated that modernizing the financial sector, including issuing a digital ruble, would be fourth on the list of the central bank’s priorities. She added that wider digital ruble pilots should start as early as 2023, helping to lower the cost of payments for companies and citizens.

It is therefore unlikely the digital ruble, which was just announced as a pilot in early 2022 and is not considered for non-resident transaction tests until its third stage of implementation could play a significant part in the Ukraine invasion or related sanctions.

Although there is a separate paper on China in this series on CBDCs, it can be said here that it is also unlikely the digital yuan will play a significant part in the Ukraine invasion or related sanctions. The People’s Bank of China and other Chinese officials have emphasized the digital yuan is a locally-focused effort, and probably would not want to draw attention to or associate their CBDC with weakening sanctions.

Russia has been dealing with sanctions since the annexation of Crimea in 2014 and has taken clear steps to decouple or reduce its exposure to the international financial order. For example, it has reduced the proportion of US dollars and euros in its international reserves and developed new local payment networks and messaging systems.

The digital ruble pilot was one of the most advanced in middle to large economies just before the invasion of Ukraine. In 2020 the Bank of Russia announced a digital ruble pilot that seemed to be moving to greater practical use. The announced digital ruble concept seemed to follow the design, motivations, and concerns of emerging market central banks. Perhaps to prepare for an expansion of its CBDC pilot, in early 2022 the Bank of Russia strengthened controls on the use of cryptocurrencies and stablecoins for payments.

The invasion of Ukraine has forced the Bank of Russia to review its priorities, but it has not abandoned its digital ruble pilot altogether and is still listed as a priority albeit of lower than before. The actions of the Bank of Russia and the Russian Government seem to have given highest priority to developing local alternatives to Visa, Mastercard, and SWIFT, using other currencies for trade. In her recent confirmation hearing, the head of the central bank stated the digital ruble was the central bank’s fourth priority.

5. Specific Recommendations for the digital euro

Takeaways for the digital euro from the digital ruble efforts are similar to those of other central banks. The Bank of Russia seems to envision a two-tier operating model where it would develop and run the system and issue the CBDC, but it would be the financial institutions that would interact with clients through wallets. The central bank has set milestones and seems to be heading to using state payments to support the adoption of the digital ruble. It has also considered cross-border use at a later stage of the pilot. The Bank of Russia’s CBDC design includes offline use since its 2020 market consultation, perhaps earlier than other central banks.

There do not seem to be any major CBDC takeaways specific to the invasion of Ukraine, the annexation of Crimea, or the related sanctions given the limited role the digital ruble still has in Russia (or the equivalents have in China and in other trade partners). Despite this, going forward, Russia and China may collaborate further on creating alternatives to the current financial order. While it is unlikely the Russian ruble or Chinese yuan can seriously challenge the US dollar or euro's role in international trade, these two countries and others may,

This article was prepared by the authors. The views expressed in this article are the author’s own and do not necessarily reflect the views of the Digital Euro Association.