Project Hamilton by the Boston Fed: A Summary

Project Hamilton is a joint venture between the Federal Reserve Bank of Boston and the Massachusetts Institute of Technology’s Digital Currency Initiative.  It is a multi-year research project aimed at gaining a hands-on understanding of CBDC design.  Hamilton is in phase one, researching a transaction processing system flexible enough to support experimentation with multiple CBDC models. In a white paper, “A High Performance Payment Processing System Designed for Central Bank Digital Currencies,” the Project Hamilton developers describe their efforts and results.  Here is my summary of the Hamilton Project whitepaper.

First of all, I was struck by how much thought is being put into creating private or anonymous transactions. Here’s what I have gleaned so far.

First, they are decoupling “transaction validation from fund existence checks; only a validating layer needs to see the details of a transaction.” Funds are stored as “opaque 32 byte hashes inside an Unspent funds Hash Set.” This UHS, it is argued, will allow for future privacy-preserving designs that will be explored in Phase 2 of the project. They are also following the UTXO model to allow for “scalable privacy designs.” (Bitcoin comes up a lot in this paper.)

A key to Hamilton’s privacy design is the use of “sentinels” for local validation of transactions. These sentinels receive transactions from users and validate that each transaction is correctly formatted, has valid signatures, and that the balance is preserved (outputs equal inputs). For the sake of privacy, the sentinels could then “strip witness data and only forward the transaction’s inputs and outputs for processing.”

Further, the developers state that the transaction processor does not need to store account balances and information, but the sentinels need to see them to validate a transaction. “We anticipate being able to remove this requirement using cryptographic privacy-preserving design” in Phase 2.

This will result in rather anonymous transactions. However, the devil is in user access to the platform. What KYC will be needed to get into this game?

The Project Hamilton CBDC system has two potential designs: the Atomizer and the Two-Phase Commit (2PC).  Here is a summary of how the Atomizer transaction is executed.  The different components are in CAPS.

A transaction is submitted by a wallet to a SENTINEL (a local platform component) that validates the transaction and reports back to the wallet of pending status.  The SENTINEL then verifies and compacts the transaction, stripping it of identifying data, and forwards it to SHARDS that hold unspent outputs. 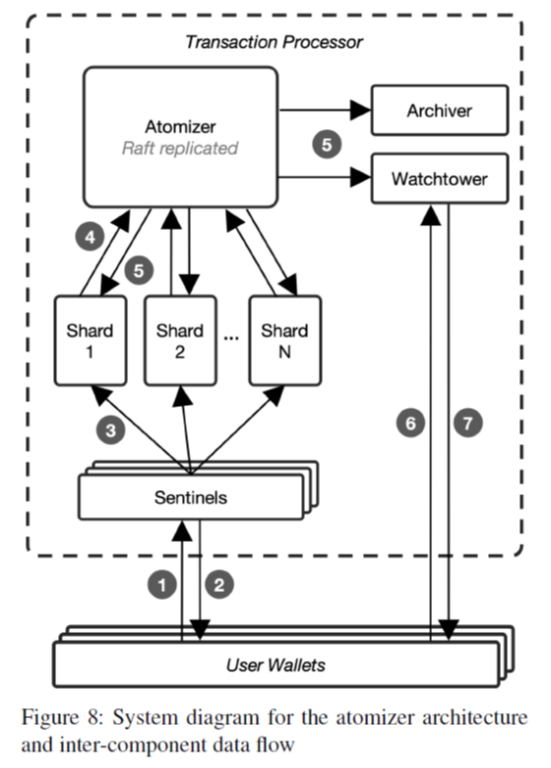 The SHARDS then check that the input UHS (Unspent funds Hash Set) IDs are actually unspent.  If so, the SHARDS send the transaction to the ATOMIZER along with their current block height and the UHS IDs.

The ATOMIZER collects the data from the SHARDS and “appends the compact transaction to its current block.” Once the block is made, the ATOMIZER broadcasts this to the SHARDS, which update their current block height and set of UHS IDs.  Also informed is the ARCHIVER, which retains a record of all the blocks created.

The ATOMIZER also sends this information to the WATCHTOWER.  The WATCHTOWER “updates its cache of UHS IDs to indicate which have been spent and created recently.” It also informs the wallet that the transaction was successfully completed.

Here is how a transaction is conducted in the other Project Hamilton design, Two-Phase Commit (2PC).  The 2PC consists of transaction coordinators and shards.  Each SHARD holds the unspent UHS (Unspent funds Hash Set) IDs. (Again, the different components are in CAPS.)

Briefly, this is how a transaction occurs in the 2PC.  A Wallet sends a valid transaction to a SENTINEL, which compacts the transaction, stripping it of identifying data, and forwards it to the coordinator.  The coordinator then “splits input and output UHS IDs to be relevant for each SHARD and issues a ‘prepare’ with each UHS ID subset.” 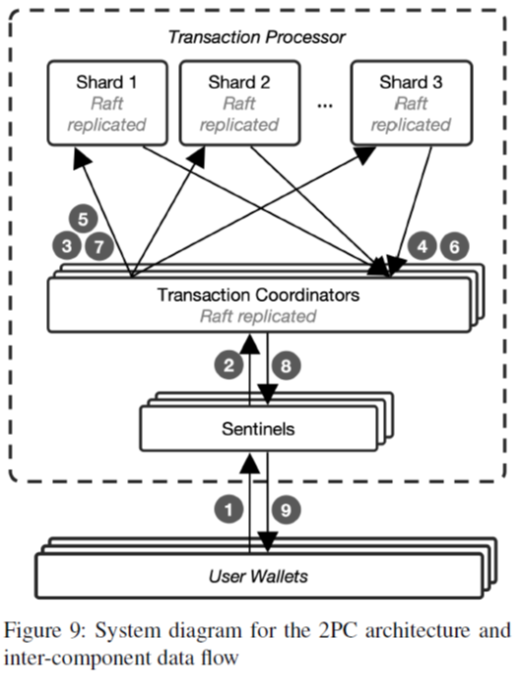 It is very difficult to accurately summarize the authors’ comparison of the Atomizer and 2PC designs.  A very rudimentary summary is that the 2PC model is more scalable with higher throughput than the Atomizer.  But, the 2PC model may present a greater “attack surface” for exploiting bugs as it scales up, and it may have greater trouble recovering from a crash or power failure.

In concluding my review of the Project Hamilton CBDC white paper, I want to summarize the seven key results of the project as identified by the authors, which are enlightening:

This article was prepared by the author. The views expressed in this article are the author’s own and do not necessarily reflect the views of the Digital Euro Association.