A recap of the most important resolutions

On March 23, 2022, the DEA’s first general assembly took place joined by 25 participants (virtually and in person). Most of the DEA Executive Team and founding members gathered in Frankfurt to join the assembly. The DEA’s active and supporting members joined via Zoom to pass resolutions, recap 2021 and discuss the DEA’s strategy and goals for 2022. 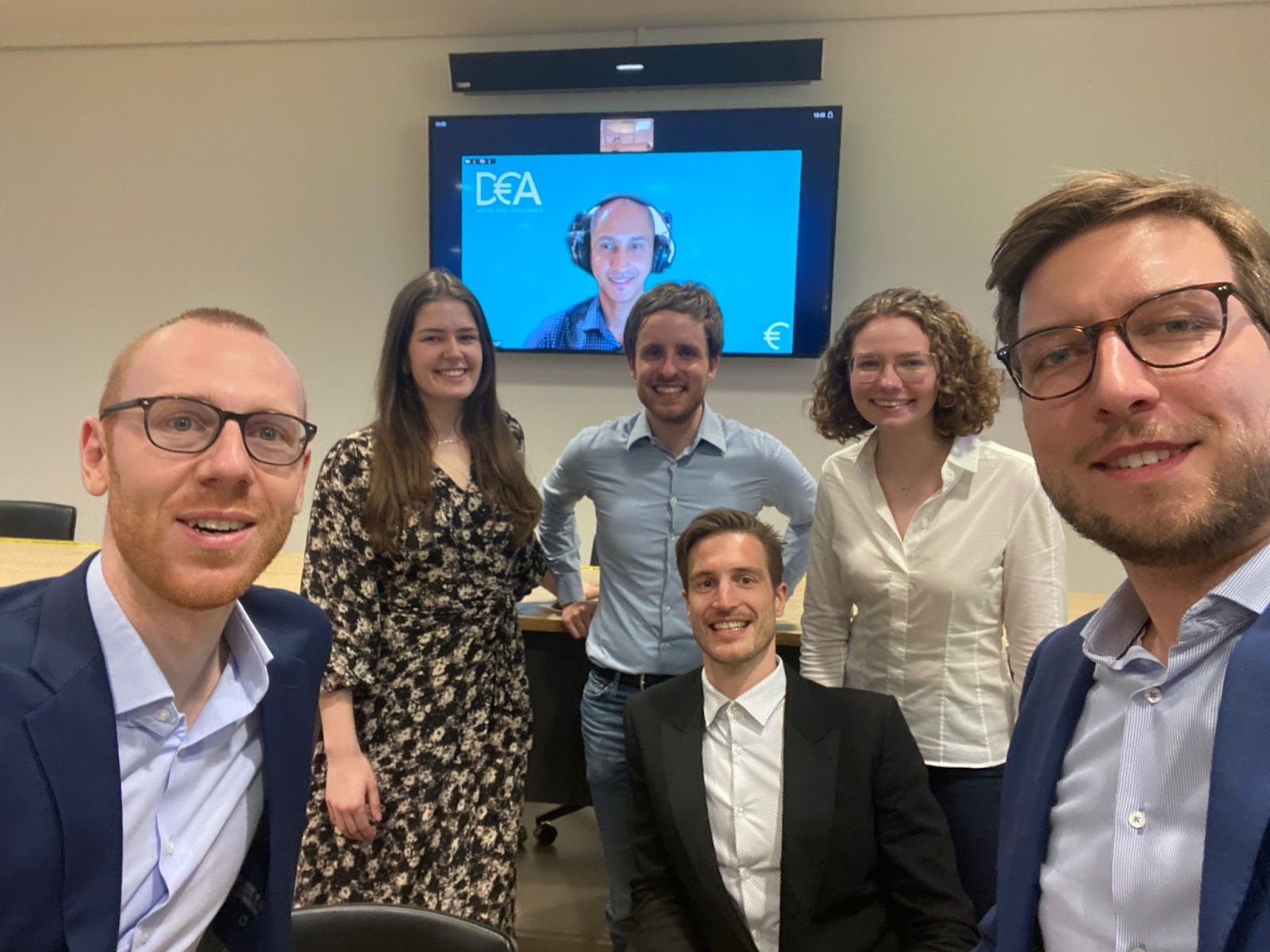 1. Welcome & opening by the executive board
Jonas Gross, the assembly director, kicked-off the event with a short welcome and introduction to the assembly, followed by the presentation and acceptance of the 2021 reports.

2. Presentation and acceptance of 2021 reports
The DEA’s journey over the past year was outlined with milestones such as the official legal establishment of the DEA (in April 2021), the first supporting members (Bundesdruckerei and cLabs) that joined in July 2021, and the launch of the DEA Working Groups in February 2022.

Related to institutional members, the DEA welcomed 26 new active members and two new supporting members in 2021. As per the DEA blog, website, social media and podcast and newsletter there was an overall positive growth trend in terms of clicks, subscribers, followers and engagement over the course of 2021. A significant increase across these metrics was noted between July and December of 2021.

After recapping the past year, the DEA board was discharged for 2021.

The new board was unanimously elected as proposed.

All members accepted their proposed roles and shared their 2022 vision for the DEA. The new board members talked about the importance of reactive and proactive engagement regarding publications from policy-makers, the ECB, as well as worldwide developments and news on topics such as stablecoins and CBDC advancements. They further placed emphasis on increased engagement with the DEA community in 2022 (i.e., foster collaboration with individual members through the working groups, social media and strengthen institutional community ties via joint events, research and publication efforts). 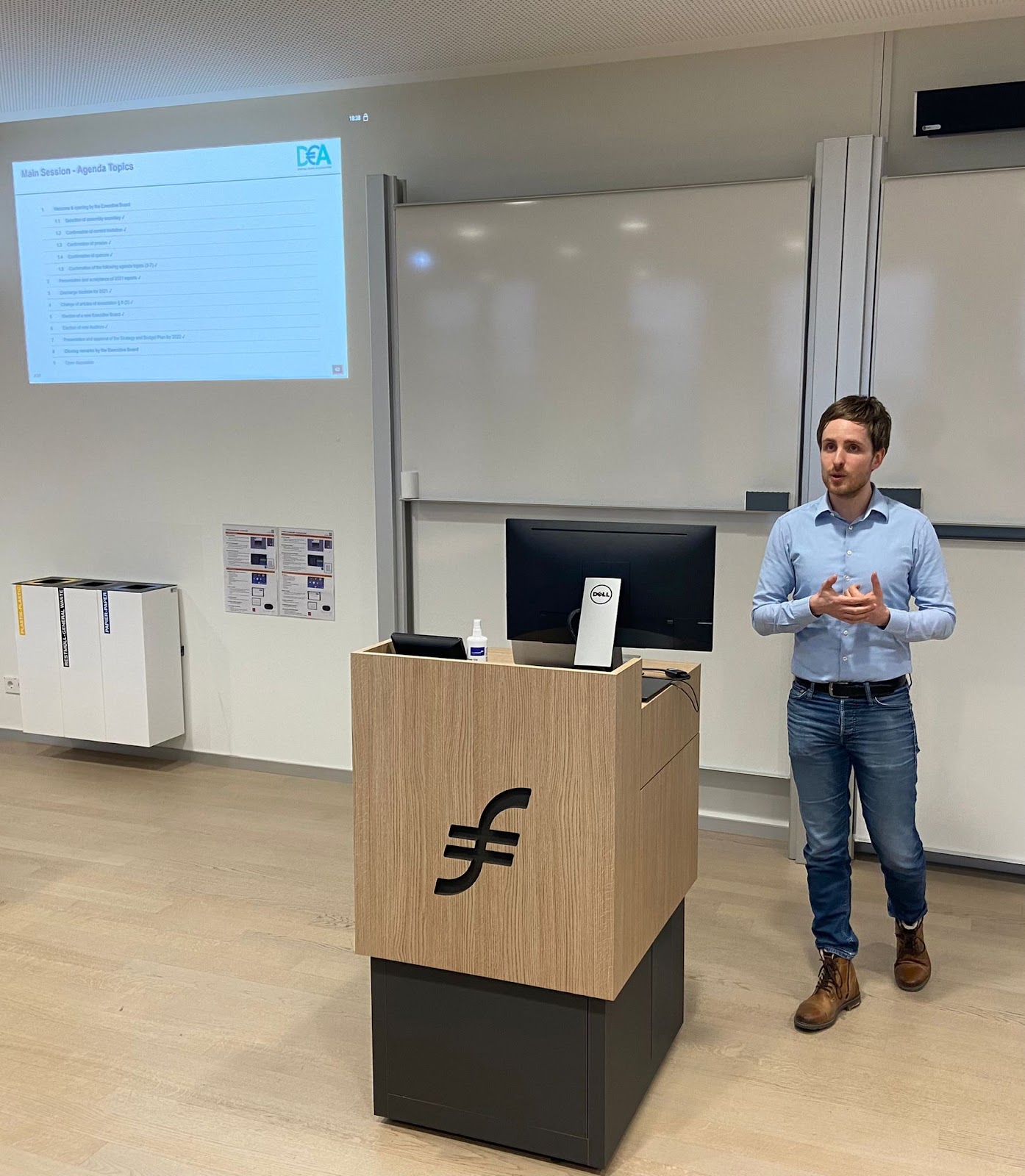 
Following the election of the DEA Executive Board, the general assembly moved on to the election of the new auditors. Atakan Kavuklu and Timo Kohlhaase were proposed as the successors of the outgoing Manuel Klein and Alexander Bechtel. Both of the proposed auditors have an existing affiliation with the DEA, namely, that both nominees are active members of the DEA Associate Team.

Atakan Kavuklu and Timo Kohlhaase as the new auditors were unanimously elected.

5. Presentation and approval of the strategy and budget plan for 2022


The DEA 2022 Strategy and Budget Plan was presented. The general goals, community growth, strategy for the DEA working groups, social media growth strategy, various research projects, collaborations and the budget plan were outlined by the relevant executives. For example, the new Digital Euro Podcast news format and several collaborations with other think tanks and research facilities (e.g., with the Digital Pound Foundation) were outlined. It was noted that the DEA’s highest priority and expense in 2022 is related to further expanding its human resources.

The proposed budget plan for 2022 was unanimously accepted.

6. Open discussion
A short discussion about the importance of establishing the “DEA DNA” commenced. As one of the main goals for 2022, the DEA’s goal is to develop an official DEA position regarding digital euro-related topics in Q2, Q3 and Q4 which will involve DEA e.V. members in the process.

Our active and supporting members made the first DEA General Assembly a resounding success that reflected on the past, evaluated the present and shaped the future of the DEA growth. To celebrate this milestone, the DEA Team had dinner together, catching up on industry news and discussed points raised during the general assembly.